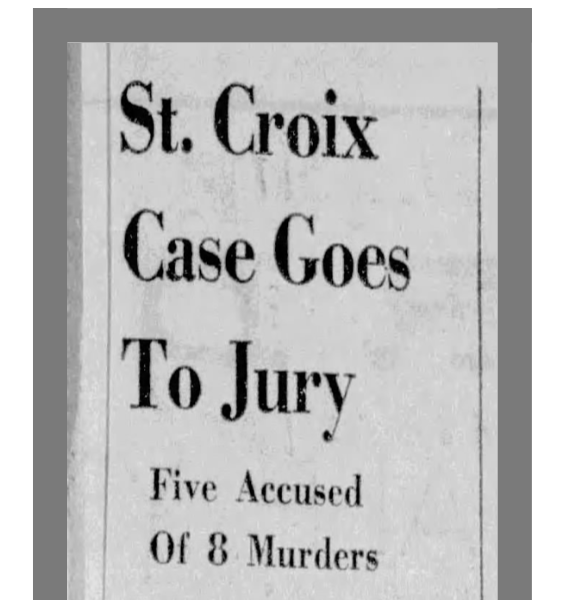 Christiansted, St. Croix, V.I. - (UPI) - The murder trial of five young blacks accused of killing eight persons in a robbery at a Fountain Valley Golf Club last year went to the jury Saturday in an atmosphere of rising racial tension.

Judge Warren Young told the jury of eight women and four men, all black except for one white woman, that they must bring in unanimous verdicts, innocent or guilty, for each of the five defendants on each count.

Several white spectators reported racial insults, kicks, aggressive jostling, and in one case a ripped dress at the hands of blacks while waiting at Government House gate to enter the courtroom on the final day of the 22-day trial. Approximately 80 percent of St. Croix’s 40,000 residents are black.

A number of white residents left the island after the brutal murders, Sept. 6, 1972, when a band of masked men shot up the dining terrace of the Rockefeller-owned golf club, robbing victims and the pro shop of an estimated $800.

Seven of the eight persons slain were white. The other was a clubhouse employee from Trinidad. Two Miami couples on a golfing vacation, the John Meisingers and the R.W. Griffins, were among those killed. Four other persons were wounded by gunshots.

The government of the tourism-dependent Virgin Islands reacted with a police dragnet during which the suspects being tried were arrested.

The defense effort, headed by William Kunstler, has attempted to demonstrate that statements given to Federal Bureau of Investigation agents by the defendants followed hours of brutalization at the hands of Virgin Island police.

The defense also sought to discredit a principle prosecution witness, James Truitt, who placed the five together at a house he owns near the golf course shortly before the massacre. He is an uncle of two of the defendants, and Kunstler suggested that Truitt was inspired by a $25,000 reward and the knowledge that he would inherit the family property if his two nephews are sentenced to life imprisonment.

The prosecution, headed by U.S. attorney Julio Brady, a non-black island native, based the major thrust of its case on testimony by a clubhouse employee who witnessed the shootings and on testimony linking a submachine gun and a pistol allegedly traced to the defendants with slugs removed from the victims’ bodies.

Almeda Winter, a waitress at the clubhouse, identified Labeet and Joseph as two of the assailants. She was a surprise witness, testifying that she had only recently overcome her fear to make the identification.

About 40 U.S. marshals, mostly black, were sent here to insure that the trial is carried out safely. Three times Young ordered the defedants removed from the courtroom for obscene outbursts against the judge, white spectators and whites in general.