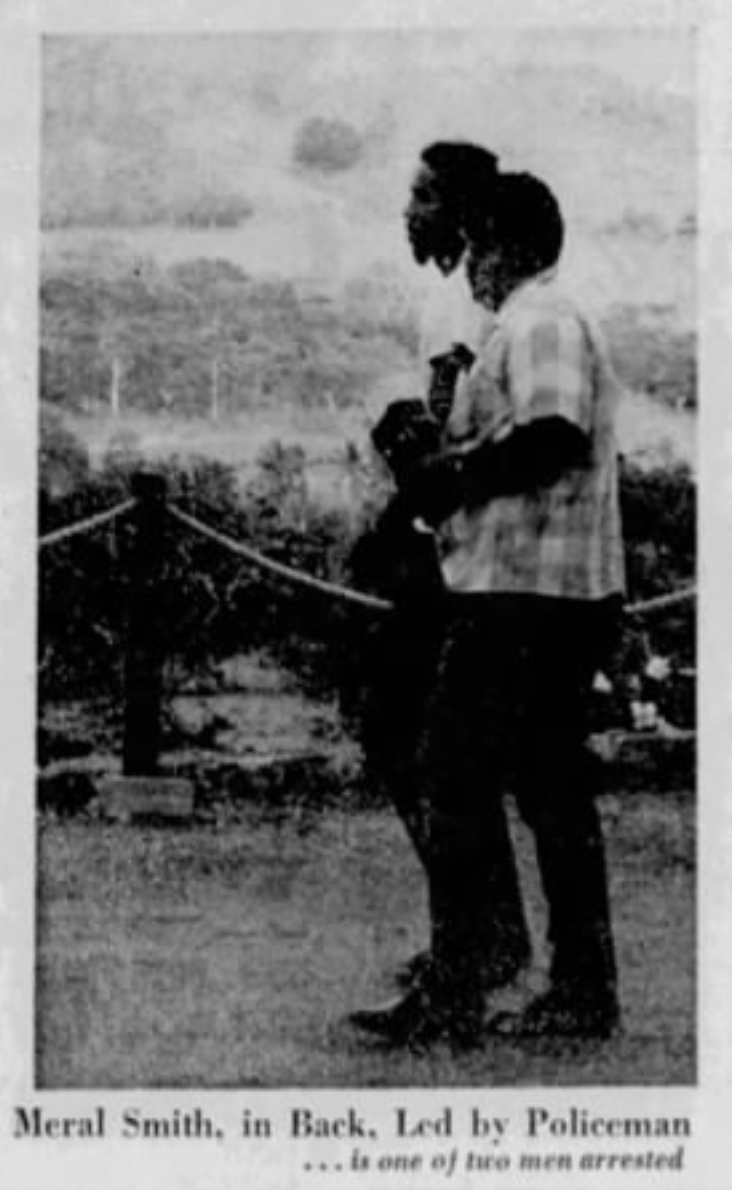 Bond was set at more than $1 million for each man, authorities said.

Atty. Gen. Ronald Tonkin said Meral Smith, 21, and Beaumont Gereau, 23, were arraigned before Municipal Judge John Marsh on eight counts of robbery and murder. Both men are from St. Croix.

Marsh set bond at “more than one million dollars,” according to a statement issued by the office of Gov. Melvin H. Evans. The exact figure was not released.

Officials said five to seven gunmen were involved in the atatck and Tonkin said earlier in the day authorities think they know the identities of the gang members.

The news release said the arrests came “72 hours after the crime was committed” - indicating the men had been in custody at least since Friday.

Both men were hustled into the search command post at Fountain Valley Golf Course, scene of the slayings, by police. The two black men wore blue denim shirts, blue jeans and were barefoot, observers said.

They were taken later to an undisclosed location for arraignment.

Four tourists from Miami and four employees of the Fountain Valley Golf Course died on Wednesday in the hail of bullets from automatic weapons that riddled the plush resort owned by the Rockefeller family.

A half-dozen masked robbers rifled the pockets of the dead and took $731 from a cash register in the pro shop before fleeing into the dense, jungle-like terrain bordering the golf course.

Tonkin emerged yesterday afternoon from the club house where he has set up search headquarters and said: “Gentlemen, I have a very short statement. I will accept no questions after I’ve made the statement.”

He then identified the arrested men, adding: “We are continuing the investigation.”

Specially trained FBI teams combed the rugged countryside northeast of the golf course until nightfall in their fourth day of searching.

Meanwhile, a liaison coordinating the comtributions in a reward fund said the bounty on the robbers has risen to $26,200. The donations included $5,000 from Laurance Rockefeller of New York, $15,000 from an anonymous person, and $1,200 each from three hotel owners. The fund was established with a $1,000 contribution from the Virgin Island government.

Earlier, Tonkin said at a news briefing, “We think we know who it was done by and we think we now have the identity of the killers.” He did not elaborate.

Five suspects arrested Friday in a Christiansted house and charged with possessing illegal weapons were still being questioned to determine whether they were connected with the crime. The names of the suspects were not released.

The manhunt which involved FBI agents, federal marshals and local police was concentrated in the forested hills of the 84-square-mile island’s interior, where police said the gunmen might be holed up.

Virgin Islands Commerce Commissioner John P. Scott made it clear that the murderous golf course assault would have strong repercussions in the territory’s vital tourist industry which represents : “it is really heartrending for something like this to take place at a time when our promotion, advertising and public relations people are doing all they can to bring business and more tourists to the islands.”